Gypsies are far more concerned of the living than the dead, however the Rom believe there must be a vigil prior to the death of a family member if at all possible.  After death there will be a funeral followed by a proper period of mourning.

When a Gypsy elder was ill and close to death, word is sent far and wide to gather family members where they happen to be scattered.  Once word is received, the family will immediately return home, no matter the distance.  This event will take precedence over any other going on in one’s life.  The members gather around the dying person’s bed or outside around the vardo or tent.

The dying will never be left alone, someone always will be sitting next to them.  They will socialize and never discuss or show emotion on the impending death.

Once dead, the Gypsies believed their loved one was caught between the world of the living and the world of the dead.  They thought the dead would stay in this state until buried.  To make them comfortable with this transition, they would prepare a ritual sometimes performed by the Shuvani (a healer, wise woman of the Romani).

The ritual entails a small fire be lit as soon after death as possible, separate from the cooking fire.  The fire should be laid where once lit it will last for a good deal of time without adding more kindling.  Onto the fire they throw in order thyme, sage and rosemary.  The dead’s name will be chanted repeatedly as the Shuvani walks widdershins (counterclockwise or backwards) seven times around the fire, which will be left to burn out by itself.

Once buried, the dead will enter the world of the dead, to be remembered by those they loved. 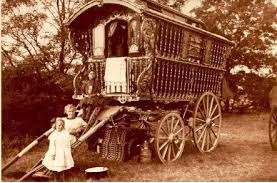