Now reading: Shakespeare, Witches and Superstitions
Share
PrevNext
Double, double toil and trouble;
Fire burn and cauldron bubble.
Fillet of a fenny snake,
In the cauldron boil and bake;
Eye of newt, and toe of frog,
Wool of bat, and tongue of dog,
Adder’s fork, and blind-worm’s sting,
Lizard’s leg, and howlet’s wing,
For a charm of powerful trouble,
Like a hell-broth boil and bubble.

Shakespeare?  Yes, these are the words from the Three Witches of Macbeth.
But what is wool of bat, eye of newt, howlet’s wing, blind-worm’s sting, really?  These are the types of items that give witches a creepy stigma.  Many believe these items were nicknames given to common herbs used by witches and many others before and after the year Shakespeare wrote Macbeth in 1605.

Many have speculated on what some of these items actually are, rather than a literal tongue of dog.  The general consensus is that the eye of newt is mustard seed, the toe of frog is buttercup, the wool of bat are holly leaves, the tongue of dog is hounds tongue, the adders fork is adders tongue and a blind worm is actually is just that a blind worm.  Additionally, it is a small European lizard with no legs and is more of a snake than a worm.  In the 17th Century, they thought this “worm” was poisonous, but in fact it is not.  It is also called the slow worm.

Mustard Seed (black seeds) - strife, confusion, discord and disruption.  Folklore states that witches are always preoccupying themselves counting and picking up things.  Some swear if you scatter mustard seeds near your home, the witch will never cast a spell on you, as he/she will be too busy counting mustard seeds.
Here are some other interesting superstitious facts of things you might have in your kitchen or home from centuries ago mostly from Northern Europe.
Salt – so many cultures believe it is bad luck to spill salt, and to reverse the bad luck throw a pinch over your shoulder to blind the devil and prevent him from stealing your soul.
Christmas Cake – each member of the family should take turns stirring the Christmas cake batter or bad luck with befall on the family, but mostly applicable to unmarried girls, as legend states will then remain alone for another year if they do not take their turn stirring.
Mustard Seed (yes, again) – Europeans believed sprinkling mustard seed on their roofs it would protect them from vampires.
Noodles – in the Chinese culture you would never cut a noodle but leave it as long as possible.  Serving long noodles superstitiously ensure a long life to the recipient but cutting or breaking the noodles is the same as cutting their life short.
Garlic – this is a very well-known fact that garlic will protect you from the Evil Eye, so always carry some in your pocket.
Onions – Ancient Egyptians kept onions around them at all times to keep evil spirits away and prevent harm.
Pot of Tea – An old English superstition states it is bad luck to have someone else pour your cup of tea.  Always make sure the lid is on when brewing, never spill or you will get a visit from an unwanted stranger.
Slice of Cake – Also in Northern Europe it was believed if you served cake and a slice tipped over, it would befall the recipient bad luck for a year.
Hot Chili Peppers – Never hand a hot pepper to a friend or your friendship will end on hostile terms.
Bananas – Everyone knows NEVER to bring a banana on a boat, right?  For centuries, fishermen banned bananas from their boats.  Long ago, the curse began when a fisherman on a boat ate a banana and fell extremely ill and died, and a new superstition is born.
Chewing Gum – for centuries in Turkey it was believed that if you chewed gum after dark, it was known you were chewing on the flesh of the dead.
Rice – why do we throw rice at weddings?  Traditionally it was thrown at the bride and groom so no evil spirit would bother their marriage.


Common Kitchen Herbs and Their Magical Uses
All of us use plants and herbs for healing and our magical spells and rituals and this practice has been around for centuries and is not going anywhere anytime soon.  Some of these herbs we have in our kitchen cabinets have magical powers.
Here are some common herbs and their uses in magic that most of you are already aware of, but still interesting just the same.
Hope this was as much fun reading as it was writing!  Next time you are cooking for loved ones, feel free to throw in a generous portion of intention along with your herbs! Happy cooking! 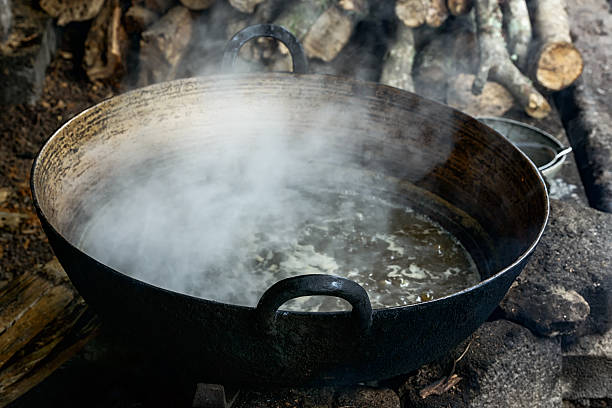